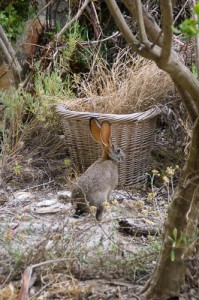 Scrub hare in the garden

Over the last few days we have been graced by numerous sightings of hares. They have come very close to our house, on the lawn in the early morning and evening, as well as along the approach road to the self-catering cottages. The hares have come to nibble on the now drying grass of our lawn. Presumably, similar food material is becoming scarcer elsewhere on the mountain slopes as the summer progresses. At present we welcome the sight of them hopping around the grass and bushes nibbling the tops off the plants. We may consider their presence differently if we ever start growing vegetables.
A hare’s lolloping hops and over-long ears may look cute and cuddlesome, but it can put them to good use. The ears quickly detect any sound of nearby human and the strong legs mean that it can bound over bush and rock at astounding speed. These photographs were taken by allowing the hare to come close to the house not by us approaching it. 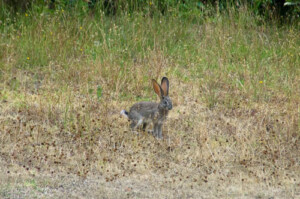 There are two species of hare in South Africa. The imaginatively named Cape hare (Lepus capensis) and the scrub hare (Lepus saxatilis). The two are incredibly difficult to tell apart from physical characters alone. The scrub hare is slightly larger than the Cape hare, but this is hard to gauge when one only has a single example at an indeterminate distance. The guide books talk about how the scrub hare has all white underparts but in the Cape hare only a part is white. Good luck getting one to roll over for you to check this out! The scrub hare is a more grizzled grey in colour while the Cape hare is more brownish grey with black flecks, which may be diagnostic but only once you have seen both. 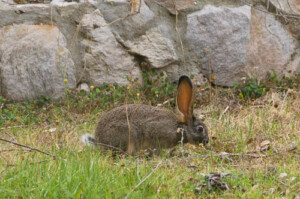 Scrub hare grazing on the lawn

So what is the best way to distinguish them? Well the Cape hare prefers drier open country and grassland, while the scrub hare prefers more cover from woodland and bushes. And the final distinguishing feature, literally: the Cape hare runs off with its ears held erect, the scrub hare runs off with its ears held flat. So once you finally confirm what you are looking at, it is too late to check out its other characteristics. Based on habitat alone, we believe our hares to be scrub hares, but I am willing to be corrected.