Most proteas are winter or spring flowering, so by mid-summer their spectacle is over. This does not mean to say that the fynbos is then devoid of their unusual shape and form. There are other members of the protea family, Proteaceae, to take their place. At Phillipskop, the most prominent of these in December is the broad-leaf featherbush (Aulax umbellata). This shrub grows all around our self-catering cottages and on the slopes of Phillipskop.

The species has both male and female plants. The male plants give the species the common name as the flowerheads form a rather feathery spike. The colour of the spikes is a creamy yellow. They are prominent above the rather olive green leaves, and add freshness to the fynbos at a time of the year when many other shrubs begin to look rather tired. 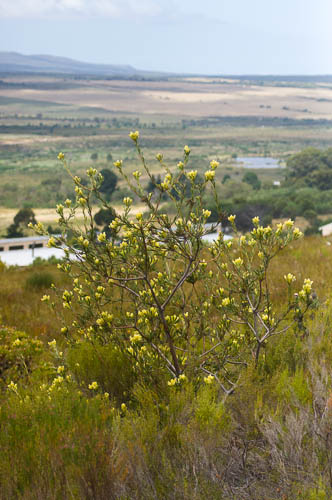 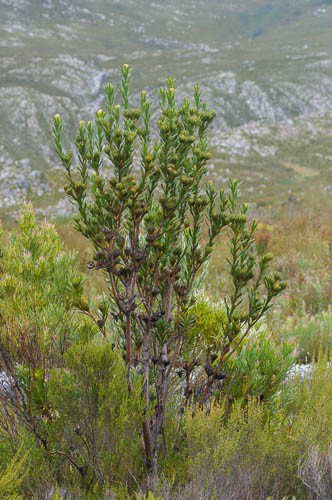 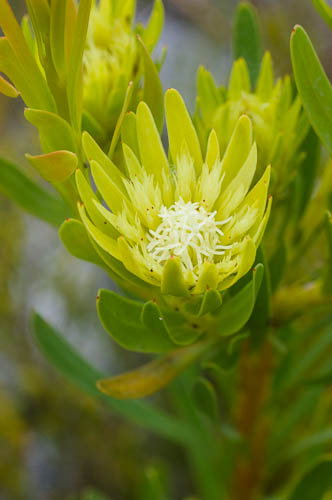 In contrast to the male, the female plants are more subdued, though still beautiful when looked at in detail. The flowerbushes are reminiscent of conebushes (Leucadendron) with a central boss of creamy white starry flowers surrounded by greenish yellow bracts. Both male and female flowers have a faint rather sweet scent. Most notable about the female plants is that each year's old flowerheads persist on the plant so that it is quite easy to age the growth. Seedlings of male plants will flower when the plants are only a couple of years old. It takes longer for the female plants to start flowering.

The species found here is known as the broad-leaf featherbush, but the "broad leaves" are only about 1cm wide. The name is rather a contrast to the other two species in the genus, which both have needle-like leaves. This species is found not only along the Klein River Mountains from Hermanus to Stanford, but as far west as the Kogelberg through to Riversdale area in the east.