Common names are often descriptive but few are as ironic in their description as that of Climber’s Friend, Cliffortia ruscifolia. Climber’s Friend is a member of the Rose Family, Rosaceae, and the most recognized member of the large Cape genus, Cliffortia. The species is well-known for growing amongst rocks and dry cliffs. It has a very deep tap root that holds the plant firmly. This makes a good safe grip for a mountaineer or rock climber. However, Cliffortia ruscifolia’s “friendliness” is tempered by the prickly leaves that readily scratch and pierce any hand that comes near to it. 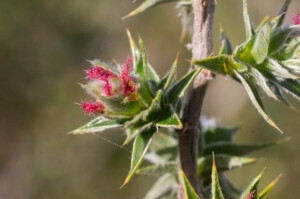 Cliffortia ruscifolia is one of the most widespread and common members of the genus Cliffortia. It is found from the arid mountains of Namaqualand, south to the Cape Peninsula and east as far as the slopes of the Kouga Mountains in the Eastern Cape. It is a very adaptable species and although naturally growing amongst dry rocky outcrops, it is often a pioneer of disturbed areas. Consequently it is regularly found along road verges or on old abandoned farmland. It forms bushes of about 1 to 1.5m high, with sharp triangular leaves in bunches along the branches.

The small insignificant flowers of Cliffortia ruscifolia form in the axils of the leaves in August and September. Like all Cliffortia, the plant is wind-pollinated, so does not need petals to attract insects. Cliffortia produce separate male and female flowers. The male flowers have 3 or 4 broad sepals and dangling stamens to distribute the pollen. While the visible part of the female flower is the feathery stigma, which pokes out to catch the pollen from the air. However, in Cliffortia ruscifolia, male flowers are very rare. Indeed they are unheard of in some parts of its range, in particular to the east of Montagu. (Of a sample of over 500 collections recorded in herbaria, only 37 had male flowers. This is also certainly an overestimation of their frequency, as male flowering plants are likely to have been collected preferentially due to their scarcity.) Considering the ease with which Cliffortia ruscifolia colonizes new areas, it is quite clear that pollen is not always needed to produce viable seed.This is an ability known as apomixis, where the female of the species can produce offspring without fertilization. It is probably common throughout the genus and is well-known feature in other members of Rosaceae such as blackberries. 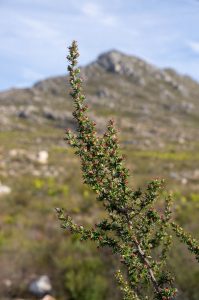 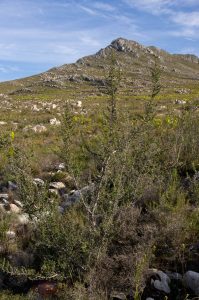 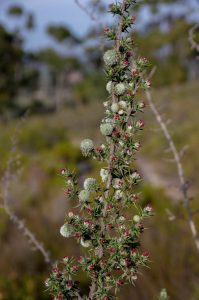 Cliffortia ruscifolia is also very prone to galls. These galls form tight balls of much reduced leaves. The hairs on the leaves make the gall look silvery white. Unfortunately, no research has been published on Cliffortia galls. Cutting them open does not reveal any midge larvae and if present it is clearly minute. Instead, the galls might be caused by a fungal or bacterial infection.

Although of limited horticultural potential, the plants are attractive when the red feathery stigmas are showing. The genus as a whole is close to my own heart, as it is what I studied for my Ph.D. at the University of Cape Town, and I have enjoyed growing many of the species. They are easy to cultivate from seed, though collecting the seed in the first place from base of the spiky leaves can be a painful experience.