Home Flora The stonecrop that thinks its a heath

The stonecrop that thinks its a heath

The genus Crassula contains a diverse range of succulent plants. They are sometimes known in South Africa as stonecrops but that common name is usually used for the related genus Sedum. Here at Phillipskop we have a Crassula that supposedly looks like an Erica; at least that is what its name implies. Crassula ericoides grows on the lowest slopes of Phillipskop beneath the self-catering cottages. The ending "-oides" on a scientific name means that the plant looks similar to another one. So in this case this Crassula looks similar to an Erica. 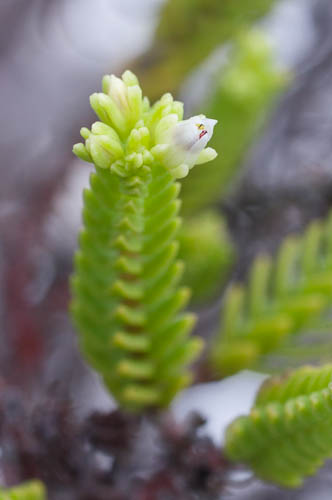 The stems have 4 rows of superposed short oval leaves. As with all Crassula, these are quite fleshy. The plant as a whole only reaches about 15cm high, with few branches. The flowers that top the stems are small white tubes with 5 short petals. It was named in 1825 by Adrian Haworth, one of the most important early collectors of succulent plants. I don't know any Erica that looks like this, though I guess the name refers to the closely overlapping leaves. Admittedly, Crassula has a lot of species and thinking up new names that capture the essence of the plant can be a challenge. I will let you make your own judgement on whether it was a good choice of name.

Crassula ericoides reaches the end of its range around here. Indeed, the official account in the Flora of Southern Africa says that it only gets as far as Swellendam. In the other direction it extends along the coast as far as northern KwaZulu-Natal. On our reserve it grows in the shallow gravelly sand between rocks, where fynbos struggles to establish. There are two subspecies. We have the typical subspecies, subsp. ericoides. The other one (subsp. tortuosa) is restricted to high altitudes in the Outeniqua and Great Winterhoek Mountains.

Crassula ericoides short habit and attractive leaf arrangement makes it a good subject for cultivating in a pot. It is easily propagated by stem cuttings, which soon produce roots if not overwatered. 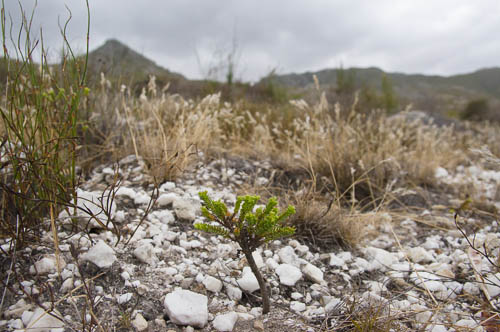 Plant of Crassula ericoides with Phillipskop in the background