The beauty of the Cape heaths is one of the most notable attractions of the fynbos. Several species have large tubular flowers; many others produce numerous flowers that cover the plant. But not all Cape heaths produce such an eye-catching display. Brightly coloured flowers are usually adapted for animal pollinators, when pollination is done by the wind then there is no advantage in adding colour to your flower. 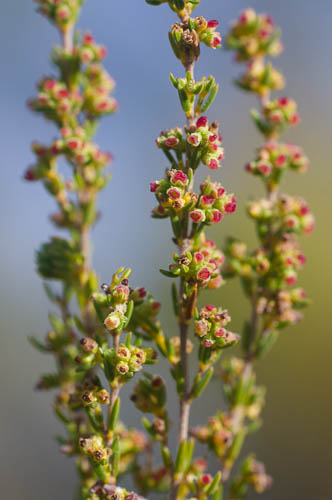 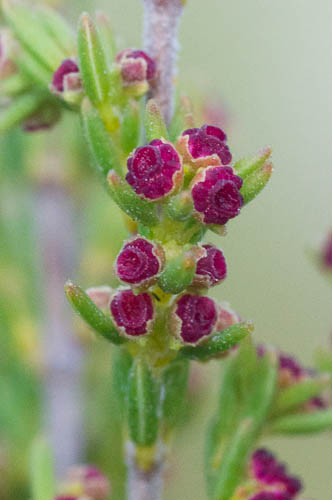 So it is that there is a suite of Erica species that are wind-pollinated. These species have very small flowers, usually produced en masse but with no particular coloration other than brownish red stigmas and stamens. At Phillipskop, one of these species is common on the lower slopes, often dominating large patches of the fynbos. It is known as Erica axillaris (as the small flowers occur in the axils of the leaves). It is sometimes hard to know when this species is flowering, as old seedheads do not look that different from fresh flowers except at close range.

The most prominent feature of the flowers is the large flat disc like stigma. Presumably, this gives it the greatest chance that some wind-blown pollen may land upon it, thus fertilising the ovary. The stamens are tucked behind the stigma and emerge later to release their pollen. This way there is less chance of the plant pollinating itself, which might lead to less viable offspring.

Wind pollinated plants are quite common in the fynbos, notably the restios. What makes the wind-pollinated heaths so special is that the genus Erica then joins a list of only a few genera that have species adapted to both animal and wind pollination. 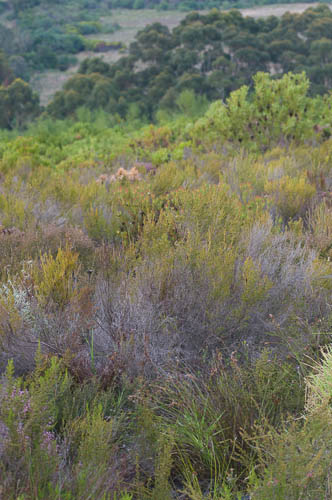