Erica banksii is one of the iconic ericas of the mountains of the south-western Overberg, including the Klein River Mountains. It is an unmistakable species. The flowers occur in bunches of 3 at the end of short branches. The corolla is a straight white tube. The white filaments of the stamens are extended beyond the mouth of the corolla. These filaments are so tightly packed together that they appear like a secondary tube inserted within the corolla. The break between the tubes is marked by the corolla lobes, which are reflexed outwards and usually of a strongly contrasting colour. At the end of the filaments are the spreading golden brown anthers. 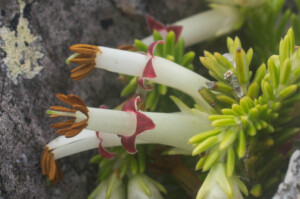 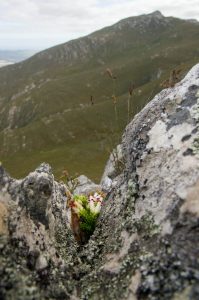 A recently coined common name for Erica banksii is the Petticoat Heath. However, the long slender tube with flared brightly coloured tepals halfway along is more reminiscent of a ballerina in a purple tutu than a petticoat. The species is found in crevices on rocky summits. In this habitat, they are protected from fire. The plants are slow-growing but attain a good size over the years. At Phillipskop, a couple of small plants have been found on the very summit of the peak. There may well be more plants but the places they grow are often inaccessible. Most plants flower from April to June, but you may get lucky at any time of the year. When not in flower, the plants are only recognisable to the trained eye.

Erica banksii has three subspecies. The subspecies growing on the Klein River Mountains, and to the south east as far as Quoin Point, is subsp. purpurea. It has purple lobes to the corolla and a hairless ovary. The typical subspecies, subsp. banksii, is found west of Bot River, on the peaks that surround the Elgin basin. Here the corolla lobes can be cream to red and the ovary is hairy. The rarest of the subspecies, subsp. comptonii, is found on the peaks around Pringle Bay. It grows more upright and has longer leaves with bristle tips. The lobes of the corolla are always green and it has a hairless ovary. It also grows in more open ground and for a long time was considered as a separate species: Erica comptonii. 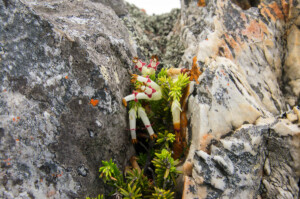