Home Flora Glowing in the sunshine

Glowing in the sunshine

High summer is here. The heat and dryness mean that most plants are in a waiting period until the rains arrive again. However, not every shrub is inactive. In the bright sunlight patches of glowing red stand out amongst the now rather brownish green fynbos. This is the new growth of Leucadendron salignum. This member of the protea family is a rather dwarf shrub with small cone-like flowers. At this time of the year, the cones are over and hidden amongst the foliage but the tops of the shoots are producing fresh leaves that are strongly suffused red. 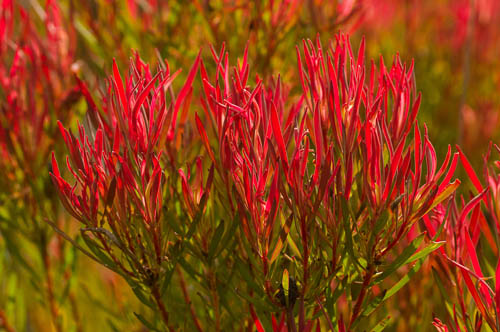 Sunlight glowing through the new growth of Leucadendron salignum 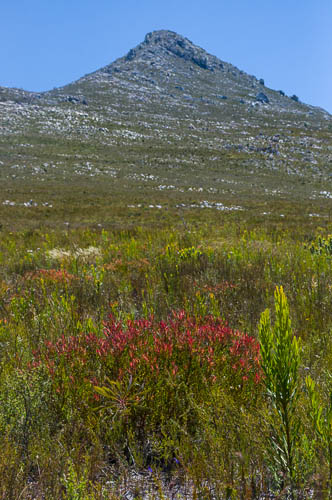 New growth of Leucadendron salignum brings colour to the fynbos

Conebushes, like Leucadendron salignum, have both male and female plants. At this time of the year, only the female plants bear cones (which tightly enclose the seeds) but both plants produce the brightly coloured new growth. Leucadendron salignum is the most widespread of the conebushes, occurring from the Northern Cape at Nieuwoudtville round to Port Elizabeth in the east. As would be expected from such a widespread species, it has a variety of forms over its range, some more yellow and green in their coloration. But we are fortunate here at Phillipskop to have a particularly fine form of deep red-tinted foliage. It is different from many conebushes as it resprouts after fire and produces a multi-stemmed shrub from a persistent rootstock. It has been given the English name of Common Sunshine Conebush, which is a very cheery name. It is especially appropriate considering its tendency to produce such colour during the hottest and sunniest time of the year.