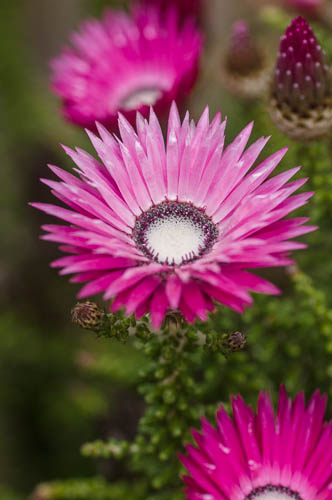 One of the beauties of the fynbos is the red everlasting, Phaenocoma prolifera. The bright magenta-red flowers appear in spring and, as the name suggests, last for a very long time, the colour gradually fading through pink as the summer progresses. Strictly speaking it is not the flowers but the bracts surrounding the flowers that provide the colour. However, let’s not get pedantic about this, calling them flowers is understandable to most people.
The plants are rather weak shrubs, that have a single stem with tightly upright branches, so that they seem rather top heavy. The flowers are only found on the top of the branches, but this makes them stand out amongst the rest of the fynbos, especially with that brilliant colour. The scientific name for the genus reflects this and comes from the Greek for shining (phaeno) tuft of leaves at the top (coma). 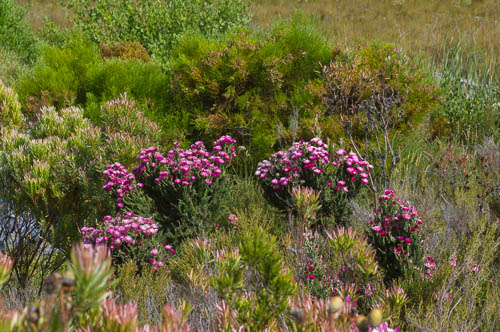 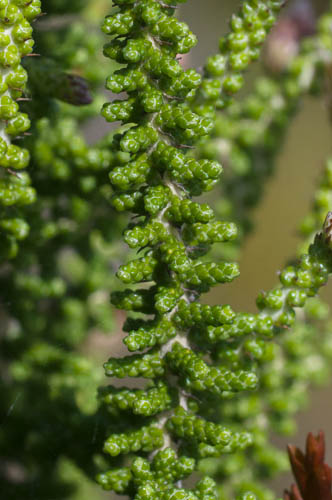 It is rather unusual amongst fynbos plants for being the only member of its genus. Normally, fynbos genera will have several similar (or not so similar) species within it, but Phaenocoma has just the one species, Phaenocoma prolifera. Other everlastings in the fynbos belong to the genera Syncarpha, Edmondia or Helichrysum with several species in each genus. (Phaenocoma is more closely related to Metalasia than these other everlastings.) This means that once you recognise Phaenocoma prolifera you cannot really confuse it with anything else as there are no other similar species. Apart from its beautiful red everlasting flowers, it is easily distinguished by its leaves, which appear as little more than numerous green bobbles up and down the white hairy stem.