Not all special plants are bold and beautiful. We found this Wurmbea glassii the other day. It is no more than a couple of centimetres high. The minute flowers are a greenish yellow and it took a second-look to realise that we were not looking at a small grass or sedge. It is a member of the Colchicum Family, Colchicaceae, a family better known for the large-flowered and ornamental Flame Lily, Gloriosa superba, or Christmas Bells, Sandersonia aurantiaca or in Europe the Autumn Crocus, Colchicum. It grows in the shade of larger protea bushes, almost hidden amongst the leaf litter. Furthermore, its unusual flowering time in late autumn, when botanists are less active, means that it is only rarely found. 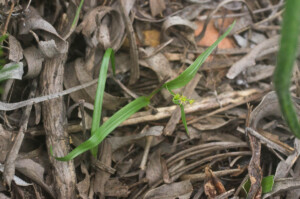 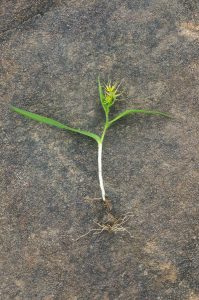 Like other members of the family, Wurmbea glassii is a geophyte (bulbous plant) with a corm as its storage organ. The underground part is actually the swollen base of the flowering stem and the sheaths that cover the corm are highly modified leaves. The true leaves are only about 2cm long and there are two or three of them up the stem. The inflorescence is composed of about 2-4 yellowish flowers. Each flower is about one centimetre across but looks a lot smaller because the six petals are so fine that they are barely visible. It has been given the common name Mosquito Lily, presumably due to the small flowers with delicate petals that are not unlike the six legs of a mosquito. However, the flowers are far more likely to be pollinated by gnats or small flies than any mosquito.

The species used to be included in its own unique genus, Neodregea. Neodregea glassii was distinguished from other closely related genera, i.e. Baeometra, Onixotis and Wurmbea, by the flowers lacking bracts, having “ears” at the base of the petals and the styles diverging at the top of the ovary. It is most closely related to Onixotis with which it shares the unusual “ears” at the base of the petals where the nectaries are situated. However, molecular work (Vinnersten & Reeves 2003) proposed that Neodregea, Onixotis and Wurmbea should be joined into a single genus. But the consensus is not universal, for more recent work (Nguyen, Kim & Kim 2013) has once again questioned whether this move was fully justified by the evidence. Whatever genus it ends up in, whether Wurmbea, Onixotis or returning to Neodregea, there is no doubt that it is a unique and unusual species. 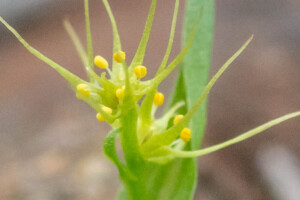 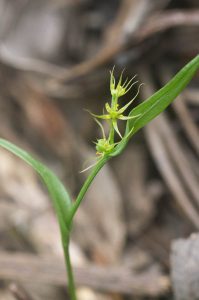 Another surprising aspect of Wurmbea glassii is its distribution. It was originally collected near Grahamstown and Port Elizabeth, at the far eastern end of the Cape Floristic Region. The third collection was at Somerset West, almost at the western end. Gradually the distribution has been filling in in between at Knysna, Agulhas Plains, Riviersonderend and Kammanassie Mountains and now Phillipskop (see iNaturalist for recent sightings). It is clear though that, even with its unusual flowering time, small size and cryptic habitat, it is never common and very scattered. It grows on shaley soils and many of these have been transformed for agriculture or housing – the populations at Somerset West at Parel Vallei and Port Elizabeth at Baakens River are almost certainly under concrete now. So it is not only rare but probably also vulnerable. It is important that even these less charismatic plants are conserved and we will continue to play our role for this species.