One should never be such in a hurry that one does not pause to double-check. At the top of Dumbe mountain that I climbed this morning, I had a breathtaking view of Cape Vultures catching the thermals at eye-level to where I was standing and soaring upwards. I started taking photographs but my memory card was full. So keen to catch a picture while they were still close by, I quickly took out a new memory card and swapped it with the old one. The new memory card still had photos on from previously, but these had been safely backed up, so I just formatted the card and started shooting away. It was only returning to my cottage after my hike, that I noticed my error: in the speed of swapping the cards, I had put back exactly the same card I had been using that morning. I had wiped all my photographs from the hike up the mountain, leaving me only with the ones I took on the way down again! 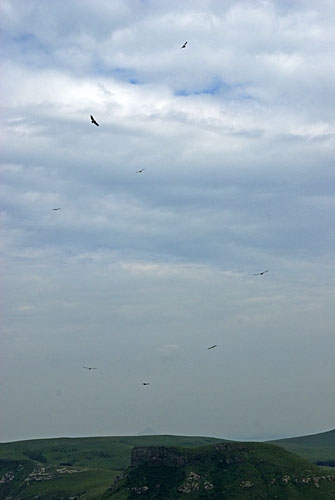 Dumbe was an interesting choice when I was planning my trip, as I had no records of pokers from the immediate vicinity. However, it was on the escarpment between Oliviershoek and Van Reenen’s Pass, both of which had several pokers recorded. However, my intuition was correct, for as I climbed the peak after which the cottages are named, I came across a very healthy population of Kniphofia breviflora that rather put yesterday’s find to shame. Even more exciting were the few plants of Kniphofia ritualis I found just below the summit on a damp south facing gully (amongst other things they have a diagnostic serrulate leaf margin – see picture). This species is predominantly found in Lesotho and neighbouring areas but it was known from a couple of peaks along the escarpment to Van Reenen’s Pass. It gets its interesting name from from the fact that the plant is used in initiation rites in Lesotho.

Plant of the day: Gladiolus papilio – this is most commonly known in UK gardens in its purple form (Purpureoauratus Group), but here it is a charming greenish cream. The purple markings in the throat are an attractive contrast, although the photograph does not show it.

Scavenger of the day: It has to be the Cape Vultures despite the heartache they have caused me.