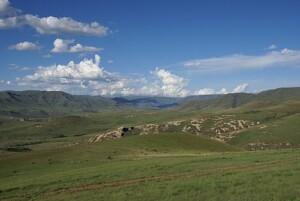 There are not many places in the world where you can drive for 50km and not pass another car but the highlands of the Eastern Cape is one such place. It is hard to understand why this area is so rarely visited, the scenery is beautiful and spectacular in its wildness. Possibly it loses out to the renown of the Western Cape flora and wines, the imposing cliffs of the KwaZulu Natal Drakensberg or the game parks of Mpumalanga.

But the plus side of this means that there are many unspoilt special places that one can have to oneself. One such of these is the road, or rather track, the Bastervoetpad (yes, the meaning of the name is as unfortunate as it sounds). This rough track runs between Ugie and Barkly Pass and is only passable with a 4×4. One also needs some sturdy bones, as even though I only travelled a short stretch, I was so shaken about by the end of it that I began to feel stiff. K. northiae grew in profusion along the Bastervoetpad and was accompanied by K. caulescens. Interestingly, K. northiae was growing in a very different habitat to that on Gaika’s Kop – much more by streams and in damp hollows. I only saw K. caulescens from a distance, but I have been assured better viewings tomorrow. 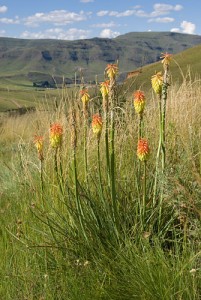 The other species that I found today is a Eastern Cape highland speciality, K. stricta. This species is unique in the genus for having deeply channelled leaves that are not keeled and held erect. It gives the foliage a much neater appearance than is typical for Kniphofia and it would be worth breeding this character into some of the more unruly cultivars. 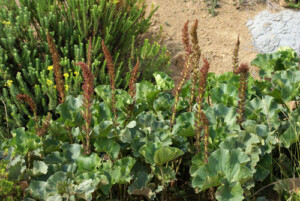 Plant of the day: The name Gunnera immediately brings to mind the giants of the bog garden. The species with the big leaves are from South America but there is a single species in South Africa: G. perpensa, which grew along the side of the streams of the Bastervoetpad. Considering it is found in high altitude marshy areas, it should survive in British gardens, but it is probably only of curiosity value in comparison to its transatlantic cousins. 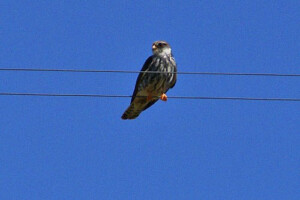 Object of the day: Telegraph wires – in the treeless landscape of the Eastern Cape grasslands there are precious few perches for birds. Therefore the telegraph wires that run alongside the road become perfect bird attractants. By far the commonest bird on these wires today was the red-footed falcon. At some points, every stretch of wire between two poles appeared to have one. But there is also good news for all have had enough of the northern winter – the European swallows were also gathering on the wires ready to start their migration north in time for summer.