Pokers in the mist

If I thought the cloud was low yesterday, it was nothing compared with today. Not even the wetlands in front of the cottage were visible. My plan to do a hike on the way to my next stop were abandoned and I just hoped that as I headed north the weather would improve. I planned my route to see if I could find Kniphofia albomontana on the way. It was first found near a place called White Mountain, hence its name. Amazingly, there were some plants just by the roadside, for if they had been any further away I would have completely missed them.

Kniphofia albomontana in the mist

Having arrived at Cathedral Peak earlier than planned, I was not allowed to check-in until 2pm. So I set off on a short hike to visit the enticingly named Rainbow Gorge. The clouds had lifted a bit, and although not enough to see the high peaks, above the level of the gorge. It was not prime poker country but it did lead to some beautiful forest, with lots of waterfalls, ferns and lianas. The patches of forest in the Drakensberg are only found in those areas that receive enough water and also avoid any fires. It was interesting to see several well known houseplants, such as Asparagus densiflorus ‘Sprengeri’, Begonia sutherlandii, and Streptocarpus gardenii, and yet in almost exactly the same habitat, Eucomis bicolor, a species that is perfectly hardy outside in the UK. 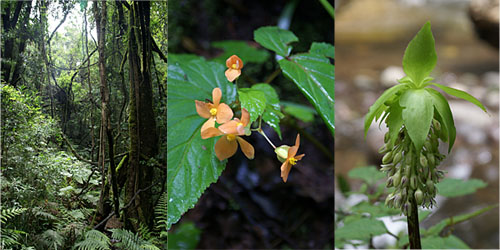 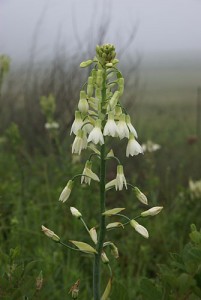 Plant of the day: Galtonia candicans – an unmistakeable plant in the garden, with its tall candelabra of pure white flowers, here it was growing amongst the brambles beside a stream well-trodden by cows. 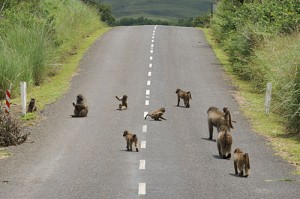 Traffic jam of the day: there are plenty of cows on the roads that are reluctant to move out of the way, but as I entered Cathedral Peak, there was this troop of baboons that had little concern that they might be in the way.