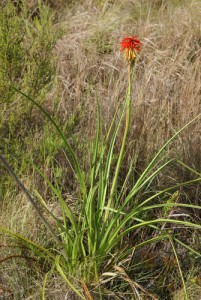 Sometimes it is better not to build up expectation– a lot of planning has gone into this trip and in the process I have imagined the joy of coming across the various Kniphofia that I will be seeking. Today was my venture into the eastern end of the fynbos in search of the “original” red hot poker, K. uvaria. (Fynbos is the heath-like habitat of the Cape Floral Kingdom, with a plant diversity as rich as any rainforest.) It was K. uvaria that was illustrated by Justus Heurnius when he visited the Cape in 1624, thereby bringing it to the attention of the European world. And it was the name K. uvaria that subsequently came to be used by the horticultural world for almost any red and yellow poker. However, upon spotting the species today, it became clear that if this was the best that red hot pokers could do, they would not have featured very prominently on most people’s planting list.

I may be being a bit unfair on K. uvaria, it is possibly not the right time for it to be flowering: there were many plants with old spikes from previous years, but only three plants with a flowering spike this year. These spikes were small, the colours rather dull and the plants did not look robust. It is clear that if these plants were typical of K. uvaria, then this species does not feature in the bloodline that has bred all those grand spikes that grace our gardens today. While the poker itself may have been disappointing, it was still great to be able to see this plant growing wild. Indeed, I may have been lucky to have even seen three spikes flowering. 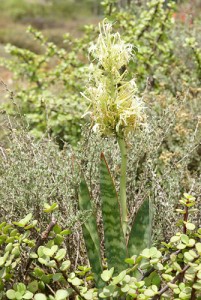 Flower of the day: Mother-in-law’s tongue are common houseplants due to their ability to withstand severe mistreatment, however, their attractive flower spikes are rarely seen under the harsh conditions of a centrally-heated home. This species, Sansevieria hyacinthoides grows in the succulent thicket and produces foot long spikes of creamy fragrant flowers.
Smell of the day: the spicy scent of the fynbos brought back many fond memories to me of walking in the Cape mountains while studying for my doctorate. The only time in the UK that a scent has evoked the same memories for me, I believe the smell came from the leaves (not flowers) of a Skimmia on a warm summers day. This would make sense, as members of the Rutaceae are one of the commonest elements of fynbos with aromatic leaves.