Today had quite a simple brief to it, travel about 80km to the next stop at Dumbe, on the way the road goes up Oliviershoek Pass where I would find K. breviflora. Syd had assured me that it was easy to find, saying that friends of his who were not even interested in pokers had spotted it there. The day also started well, with clear skies showing me Cathedral Peak and the escarpment in all its splendour (just a day too late!). 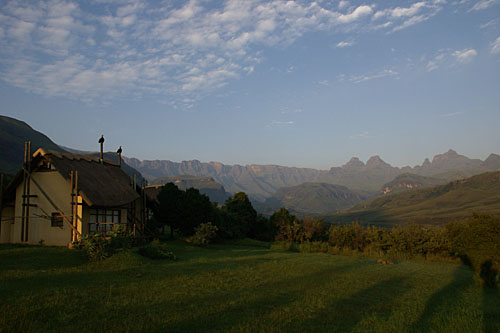 At Oliviershoek, I got out of the car near the bottom and walked part way up the road – no luck. So I drove slowly to the top of the pass, sure that I would see it on the way. But still having not seen it I parked at the top and walked down some way – nothing. Presuming now, that it was not in flower, I decided to drive down once more slowly, hoping not to upset the other drivers on the road (fortunately only few passed me). Stopping every while, so that I could look around more carefully, I reached the bottom of where I knew it could be having failed to spot anything that looked remotely hopeful, and so turned the car around and decided to head on to Dumbe. As I drove up the pass, my eyes were maybe looking to a further horizon, for I glimpsed a couple of yellow blobs in the distance. Stopping the car, I got out my binoculars, and there halfway up the hillside were two small K. breviflora. I jumped the fence and ran up to take some photographs. There were two other small spikes nearby but that was it. Either Syd’s friends had better eyesight than me, or the plants were flowering more profusely or closer to the road when they passed this way. 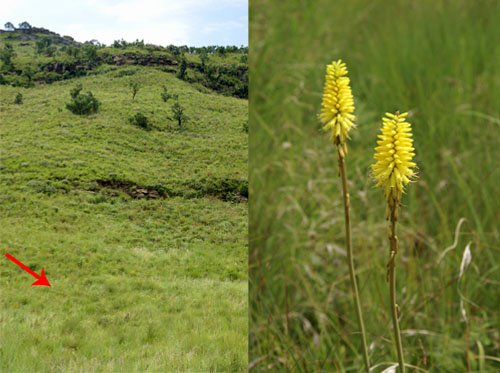 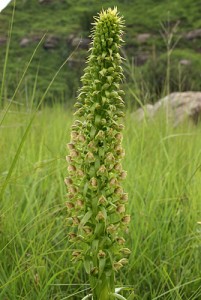 Plant of the day: Pterygodium magnum. This brute of an orchid is not particularly attractive but it is certainly noticeable as it can grow up to 1.5m tall (although this one was only half that size). 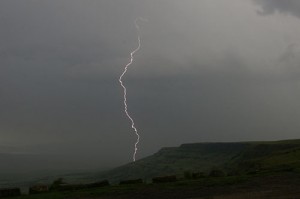 Lightning bolt along the escarpment

Lightning of the day: I am sitting here at Dumbe with a 180° view down from the escarpment that separates the Free State from KwaZulu-Natal, while thunderstorms roll around the plains below – stunning. (The lightning is better than this photo implies, but it is the only bolt I managed to capture!)